It started with custom sketchbooks… 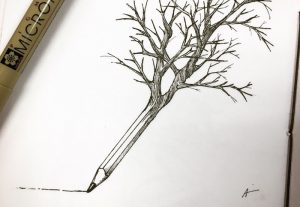 I’ve always been an avid doodle/sketcher, but last year I really decided to be intentional about drawing every day. And after going through a bunch of regular, plain black sketchbooks, I began looking at custom sketchbooks. I really was just something that had a little more personality. Sitting down with a big black sketchbook seemed a little pretentious, since nothing says “serious artist here” like one of those big sketch pads.

At the same time, one of my favorite things to do was sit in a coffee shop or a local bar, and people watch. And for practice, I would sketch what I saw while I passed the time. Consequently, I noticed that many of the six pack beer boxes were thrown away (some places still don’t/can’t recycle here). It was a shame that these boxes an illustrator or designer worked to create, yet were still ending up in the trash. As a result the idea of making my own books fell into place. 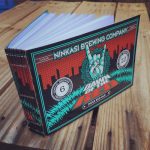 Large sketchbooks are the size of a full six-pack box, and are almost the same size. Front and back dimensions: 7.5 inches wide X 5.5 inches tall.

See all the large sketchbooks
. 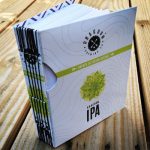 The medium sketchbooks are trimmed down from a six-pack box, or the same size as a large four pack. Front and back dimensions are roughly 5.5 inches wide X 6 inches tall.

The small sketchbooks starts out the size of a four-pack box or are trimmed down from larger boxes. Front and back dimensions: roughly 5.75 inches wide X 4.75 inches tall.

Finally, if you want a book made from a box you don’t see here, no problem! We can always do custom sketchbooks as well!