I began by making my own everyday sketchbooks just for my own use, then a few artist friends requested their own, so now I’m making them for you. Why carry a boring black sketchbook when you can carry one that reflects your personality? Handmade books are always a conversation starter!

I’ve always been an avid doodle/sketcher, but last year I really decided to be intentional about drawing every day. After going through a bunch of regular, plain black sketchbooks, I began looking for something that had a little more personality.

Flyfishing doodle in one of my first handmade sketchbooks.

At the same time, one of my favorite things to do was sit in a coffee shop or a local bars, people watch, and just sketch to pass the time. Few things are as cathartic to me as sitting in a quiet corner, with either a cold beer or a freshly-roasted coffee in one hand and a pen in the other.

In a few of the bars, I began noticing that the six pack boxes the bottled beer comes in either gets thrown away (some places still don’t recycle), and I thought that it was a shame that the boxes that some designer had worked hard to create was ending up in the trash. After that, the idea kind of fell into place.

Some for me, one for you

Once I made one for myself (my original Mercenary book), some of my artist friends began to take notice. A few asked if I could make one for them. Eventually, I began scouring BevMo, Total Wine & More and some local craft beer shops and bars for boxes I could repurpose. 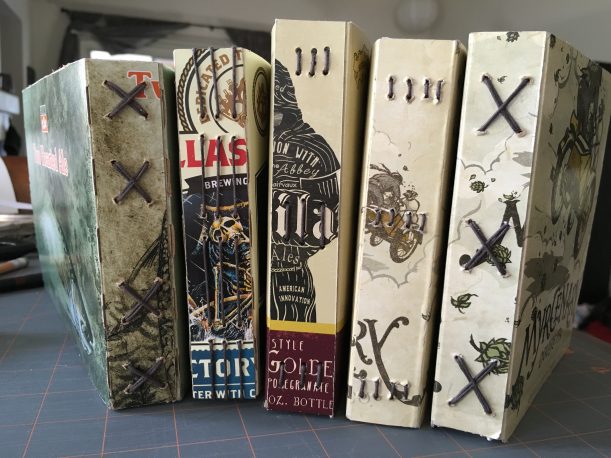 The original set of sketchbooks, before the name, testing out different bindery methods.

Making these for my friends, I learned a lot about what did and didn’t work. I learned about which stitching method was the most durable, and what paper was the most usable for drawing. Eventually, my friends suggested I start selling them, and hence, the Etsy shop was born.

The original doodle behind the logo

What’s in a name?

Coming up with the name was a fun challenge, since in order to create an Etsy shop you have to have one. I could have gone with “Aaron’s Beer Books” but somehow it just didn’t have the same ring to it. Handmade books are all over Etsy, but handcrafted books plays well with the craft beer label.

After much discussion, “Three Sheets” was chosen because of the obvious connection to alcohol, as in “three sheets to the wind“. However, the original design of the books used a three-sheet signature, which is the grouping of pages that get stitched into the binding. I have since gone to the more traditional four sheet signature since the paper is a little more pliable than the original, but the name still works.